Exciting Journey - From A Student To A Chef 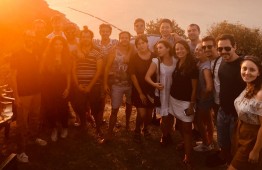 I started almost from scratch and now I learn and work side by side with the best chefs in Italy.

If you attended a culinary high school but aren’t motivated by passion for gastronomy and haven’t found the right professional education that can put you on the path of success, you don’t have an advantage over amateurs or your average food lovers. Drago Dolić was one of those people who, having finished high school for cooks, still felt uninspired by the prospect of working in this field. His story doesn’t end there though! He decided to enroll at Kul IN and has since finished two programs; Culinary Arts and Professional Pastry and Confections – he was determined to develop a well-rounded skill set and become a complete chef. He interned at a famous Italian restaurant 21.9 under the mentorship the Michelin chef of Flavio Costa. Furthermore, he has recently become an alumnus of ALMA La Scuola Internazionale di Cucina Italiana. Read Drago’s story! 1. Tell us something about yourself, your education, where did you work before coming to Kul IN?

- I went to a culinary high school, and after high school, I went to work in Korčula, where I worked as a dishwasher and assistant cook. Later, I spent two years working in Germany, at a restaurant in Munich. I started as an assistant cook but I got promoted twice - I was in charge of preparing pasta and soups, that was my department, and eventually I became the chef de partie there. I can say that I learned to cook in Germany because my superiors there gave me more freedom and they respected me more. I want to single out the moment I prepared a dish and a guest praised it directly for the first time, that was over two years ago. After returning to Croatia, I got a job in Dubrovnik at Komarda restaurant where I spent two months as a chef, and after that I came to Sisak to study at Kul IN.

2. When did you realize that you wanted to pursue a career in culinary arts?

- Although I finished a culinary high school I developed love for cooking by accident. Before 2015 I had never identified with my profession or related to it. I had been playing handball all my life, but an injury prevented me from playing any longer - I spent a month in bed and eventually decided to finally focus on culinary arts. As time passed, my love for cooking was getting increasingly stronger and here I am today, studying in Italy! I like Italian cuisine, I am even thinking about staying in Italy and building a career there. 3. Out of all other schools, why did you choose Kul IN?

- I found about Kul IN online, I was looking for the right school because I wanted to further my education. I really wanted to enroll, so I called the student office, and asked around - I was very excited. I am grateful for the time I spent here, it was difficult but it was worth it. Now I look at the concept of education differently, and I have respect for myself and other people who work hard to realize their dreams.

4. In addition to the Culinary Arts program, you also completed the Pastry program at Kul IN, how come?

- I was very pleased with the pastry program and the lecturer. I am grateful because I am now complete, I have two of the most important aspects of gastronomy covered, and when I graduate from ALMA I plan to finish a pizza master course to specialize even more. The programs directed me professionally, and I learned a lot. I started almost from scratch and now I study in Italy, learn and work side by side with the best chefs in Italy. I first learned the basics of culinary arts at Kul IN. When you finish Kul IN, you will never have to feel anxious about culinary foundations and techniques again, which is why I liked the school. 5. Any memories from Kul IN?

- I loved and looked forward to guest chefs' lectures. I liked meeting them and preparing food with them. Practicums were also always great, Ivan explained everything well, basically every day is good if I am learning something new, I cannot single out just one thing.

6. What is your main motivation when you cook?

- My family because they have always been by my side. If I became famous I would thank them first because I couldn't do anything without them. I did made money for the school myself, but they stood by me from start to finish and were my support. I can always count on them, I take the least credit. 7. What do you think are the characteristics of a good chef?

- A good chef should be fair, treat everyone equally, regardless of gender, religion, or anything else. I always prefer to work with people who are realistic and fair.

8. What advice would you give to young or insecure chefs?

- For those who really want to do it, I recommend that they do not hesitate. Start today, it is a fun job, you always meet new and interesting people, new places, regions. The culinary life is never boring and, of course, the average salary is great, you can always find work. This is a wonderful profession but you should be confident in your decision to pursue a career in gastronomy before embarking on this journey because it is a tough job, not everyone can handle it. 9. Would you change anything about your personal culinary journey from high school to Germany, and eventually to Kul IN and ALMA?

- As for school, I wouldn't change anything, but if I had known what an exciting journey awaited me, I would have started with professional training sooner.

10. What are your plans for the future?

- My plan is to continue investing in myself and working with quality chefs, so that one day, hopefully, I will become a great chef too! I would like to be known for my culinary skills, and appreciated for the way I deal with people. Everyone in this business secretly wants people to know about them, this is one of the things that push you to go further and make progress.