Everything You Wanted to Know About Interning at Restaurants – Matija Jagić 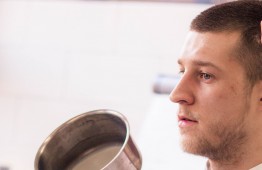 While interning, you „build“ your personal cooking style and signature. I got a well-rounded picture of top gastronomy, learned where to go. I witnessed the everyday life of top chefs and observed their thought process. It was invaluable to experience the atmosphere in the best restaurants and to be a part of that energy. Every night is like a match, the guys want to be the best and do everything perfectly, something special is in the air every time.

Still in his early twenties, Matija Jagić has worked with the best chefs in the industry and entertained guests at many Michelin restaurants such as Croatian Pelegrini, Slovenian restaurant Hiša Franko and Norwegian 3-Michelin-star Maaemo. He got the opportunity to head the Brokenships bistro in Zagreb, and recently, he has been awarded the young talent of the year award by the Gault & Millau guide. On the list of mentors and schools he has worked with and attended, Kul IN appears as well. So, what drives him, what is the key of his success story? Matija tells us that one of the most important keys is taking up internships, and he has a career to prove it! Read his story and find out what interning in the world of gastronomy and culinary arts looks like, what you should/n’t expect and where you can find the motivation to do it. When did you decide to become a professional chef?

It started when a professor asked me, after a literary competition I had participated in, what I would be like in my life, what I would like to do. I said I didn't know. At the time, I couldn't imagine being a chef. But summer was coming and my family was wondering which high school I was going to choose. Dad said I should be a cook because that's a good profession, I'll always have bread on the table and a roof over my head. I was always intrigued by the way cooking impacted my mom; she really becomes a better person when she cooks. By the time I was six I started wandering around in the kitchen, and mom would let me do the dishes and the like. I realized that cooking makes her happy. I saw that there was some magic in cooking and chose the culinary high school route.

You graduated from culinary high school, what motivated you to go beyond the curriculum, participate in competitions and pursue the career you live today?

I had good professors and mentors who directed me, and encouraged me to go to competitions, the first of which was METRO Junior Top Chef. After the competition, I got a job at Pelegrini Restaurant, but my desires and expectations were constantly growing and I needed to expand my horizons and go abroad. The money I spent two years making at Pelegrini, vanished in three months – I bought books, went to an internship to Oslo, returned to Croatia only to earn enough to afford going on an internship another. This time I went to Italy to the Aga restaurant. Wonderful people work there, and the food is modern but inspired by traditional Italian and Japanese cuisine. You have worked at many Michelin restaurants in Croatia and Europe, how is the gastronomy scene in Croatia different from the one abroad?

The difference is in awareness - they have a different culture of eating. It starts from home, people know and love to eat fine food. Therefore, a chef can be more creative, push the boundaries. The restaurant where I interned in Oslo, Maaemo, has 30 seats and more than 20 chefs, almost one chef per guest. Maaemo is open 4 days a week because the boss does not want his people to burn out and leave after a year, I liked that. The food is high-quality and experience like this can cost you up to 4 thousand kuna for a 20-course tasting menu.

Where did you learn the most and what lesson would you single out?

It's hard to pick one thing because I'm still learning, still looking for mentors. The first mentor I had was Tomislav Kožić. It was a huge turning point since he was my first true mentor, along with Marko Futirić. I cannot skip the chefs from Maaemo, I picked up something from each of the chefs I worked with and everything I learned pushed me forward. But, I would describe my next step as the most important until know - to be an apprentice of Michelin star chef.

What can Croatian gastronomy scene learn from major players?

No need to go far, we can learn a lot from our neighbour, Slovenia. They have a lot of young chefs who are in their thirties and doing something new. With that, the Slovenian gastronomic scene is growing as everyone makes sure the standards are high. We should go back to the "basics" - we have the Adriatic Sea, we have Zagorje, all the regions have their own peculiarities. Good food is increasingly appreciated; good tomatoes, homemade beans. Good ingredients are a scarcity in the world, and can still be found here. So, we could go back to basics and produce good cheese, prosciutto, vegetables, no need to complicate or despair. You have returned to Croatia, how did that come about?

Internships at good restaurants are not paid, so I ran out of money and had to go back. I like to travel and learn abroad, and apply the learned here. Basically, I go where the knowledge takes me, I don't chase for trends because it's not sustainable. Eventually, I will surely go back to my home and the hills of Zagorje.

Yes, I came to Brokenships in my early twenties. I wanted to learn from the executive chef Tvrtko, my aim was not to become the executive chef myself.  Tvrtko is very sought after, he is really great, but has a close circle of people he likes to work with and it is hard to get inside of that bubble. Yet, I got the job. However, Tvrtko quit six months later and so I took over his position. I gathered the team, we created the menu together, three menus to be exact. At Brokenships, I was developing my concept and idea regarding ​​new Croatian cuisine. Being the executive chef was an important experience because it gave me freedom I had never had before. I could create the dishes I wanted. We would go to the market place every morning, searched for traditional dishes, dug through the archives and search for old recipes. We were constantly on the lookout for old flavors. With each plate, we wanted to create a modern dish out of a traditional recipe. However, we never compromised or lost the original flavor of Croatian cuisine. I want to continue expanding this idea of new Croatian cuisine, but now I am returning to the chef de partie position because I believe it is the right thing at the moment, so I could keep learning and progress. What motivated you to pursue the career you live today?

A couple of things stand out but I want to stress the importance of skill, I always think my skills are not developed enough, and drive - something that always pushes me to work harder and better, to experience and try something new. And knowledge.

What distinguishes a top chef from the rest?

Clear and realistic motive. Children often mention cooking shows on television that present an ideal picture of the culinary business. Then you come to the kitchen, peel potatoes for a week in the basement, no air, you're hot, you're thirsty. It is clear that you will be disappointed if your only motive is the fame and superficial splendor of gastronomy. The motive must be something bigger, something that makes it worth the tough conditions. My goal is to change and work on myself, and consequently to change Croatia. I want to develop a personal style and signature that will delight guests and contribute to the Croatian gastronomic scene.

What do you cook in your spare time?

Beans stew with cabbage! I enjoy preparing these heavy meals. Friends tell me I need to nourish my talent, which is what I do when I cook a pot of beans at home and we all sit down at a table. It doesn't always have to be something complicated or ambitious; simple food, working in the garden; that is a nourishment for me.

Plans for the future?

I'm going to Germany for an internship with Vjekoslav Pajić - he's the first Croat to receive a Michelin star, but few know about him. My first mentor, Tomislav, also interned with Vjekoslav and told me all the best about him. Vjekoslav was the sous chef of Heinz Wienkl, who is perhaps the best chef in Germany. I plan to stay until I spend the money.  After that? Wherever the culinary road takes me. Can you explain what an internship means in the culinary world, what to expect and why it is good to intern even though it is not paid?

The better the restaurant, the less likely it is to offer paid internships, and people often have a problem with free work. Still, internships are crucial if we want to experience working abroad, see how the industry works, and decide whether working abroad is for us or not. As far as expectations are concerned, you should not expect to serve the plates the first day or that you will serve them at all. As a rule, your motto should be - shut up, work, take notes and be happy if they let you arrange a plate or talk to the executive chef. Top restaurants have a well-established system and cannot afford to have an intern destroy service or anything like that. While interning, you „build“ your personal cooking style and signature. I got a well-rounded picture of top gastronomy, learned where to go. I witnessed the everyday life of top chefs and observed their thought process. It was invaluable to experience the atmosphere in the best restaurants and to be a part of that energy. Every night is like a match, the guys want to be the best and do everything perfectly, something special is in the air every time.

What would you say to young chefs?

Make sure your motivation does not come from superficial things, find a good mentor in the beginning, that's the most important thing. Skills, knowledge and willpower develop over time.

What fulfills you regarding food preparation?

It's great when I make salsa and see that guests are enjoying it, I enjoy that meal then as well. As a chef, you're doing a great thing for people, it's hard for me to describe, but I feel like I'm doing something right and it makes me happy. It's very simple, I'm just as happy as my mom is when she cooks lunch. I have other goals of course, but the ultimate goal is to make others happy.