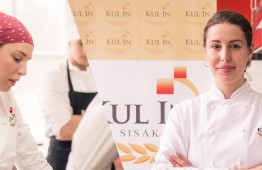 "Food means socializing, it is the source of sustainability, it represents the celebration of life, comfort and pleasure. A person who cooks is a person who gives. It is not just about the act of cooking – culinary arts is so much more than that. It is about the transformation of both chefs and food. Food can be an inspiration, and it is more about the process than just plating. My first love and passion, the love that has been with me since my childhood, is the love of food and the unity it symbolizes. That love is why I fell in love with cooking. And when you fall in love, everything else is easy. "

As a philosophy major, driven by the love for culinary arts and food, Morana Mijač enrolled in the Culinary Arts program at Culinary Institute Kul IN. After completing her education, she started her career in Rougemarin, Zagreb, where she grew under the watchful eye of her mentors, chefs Marin Medak and Petar Tomašević.

She further honed her culinary skills at the Otto & Frank bistro in Zagreb, one of the leading restaurants of the Zagreb food scene, headed by chef Zoran Pongrasic.

Her passion for counterbalancing modern and traditional aspects of Croatian cuisine was born during that period, along with the interest in the Croatian traditional cuisine and its conceptual development.

After an intense two years at the Otto & Frank bistro, Morana participated in the Croatian culinary TV show Three, Two, One - Cook!, where she competed under the mentorship of chefs Mate Janković and Tomislav Špiček. In the end, show was awarded the Best Chef title.

The culinary competition was the most intense learning period in which she expanded the scope of her culinary knowledge and skills. After finishing the show, she participated in several culinary festivals through culinary workshops (Gast Fest Sarajevo, Slatki Gušti, Taste the Mediteranean, Zagreb Craft Beer Festival).

After few years pf working in culinary arts, Morana decides to enroll in the Italian Culinary Institute for Foreigners (ICIF) in the Italian town Piemonte. There, she specialized in making gelato-based artisan desserts and further advanced her culinary knowledge. She interned at at Edoardo Gelato Biologico in Fiorentina.

Two years ago, she returned to her first love – culinary arts - and worked as the sous chef at the Hvar restaurant "Stella Mare". She assumed the position of the executive chef during her last year at the restaurant.