An innovator in Croatian pastry profession 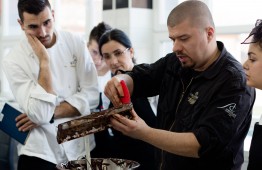 Culinary Institute Kul IN strives to bring its students closer to the culinary profession through guest lectures and demo presentations by eminent chefs. Croatia's most famous restaurant pastry chef and chocolatier Robert Bašić recently visited Kul IN, and extra seats were hard to find at his demonstration.

Chef Bašić was a fantastic mentor, answering all of the students' questions without hesitation as he shared stories from his professional and private life experiences. He is also the chocolate ambassador and partner of Callebaut, a renowned brand of Belgian chocolate. During his lecture, he covered techniques for tempering, shaping, coloring, decorating, and serving chocolate.

As the head pastry chef at the restaurant Dubravkin Put, he has mentored students from Kul IN's  pastry programs who have interned at the restaurant. Even as a pastry innovator and an inexhaustible source of inspiration, Robert Bašić has retained his humbleness and love for his work.

Kul IN: How did you begin your career in gastronomy and why did you decide to become a pastry chef?

I started working in the culinary field back in high school. As an intern I started working at restaurant Okrugljak. I first worked as a cook for ten years, but I often hopped over to the pastry section to help out the head pastry chef. I mixed cake batter and helped out with pastry preparation, and with time this field began to interest me. I realized that this was a great opportunity to learn certain elements of pastry making, and I started applying certain pastry techniques such as mousse and cream preparation in my meals. Pastry techniques can be worked into meal preparation in wonderfully creative ways.

Kul IN: When did you start working as a pastry chef, and what are some of your memories from those days?

I moved into these waters in 2010, when I landed my job in Dubravkin Put, the restaurant where I still work today. This was the first time that I was exclusively responsible for desserts preparation. At first it was a shock because I am a cook by profession, but I eventually realized that there is great demand for pastry chefs, not only in Croatia but also in the whole world. When you look closely, there aren't many good pastry chefs, and for me this was the major motivation to learn as much as possible. I went back to school to retrain as a pastry chef.

Kul IN: You mentioned that you were trained in pastry and desserts preparation. Where did you study and which mentors would you single out as most helpful in your training?

In 2014, after a few years of working in restaurant desserts, Callebaut contacted me to become their ambassador and chocolatier in Croatia, which gave me the wonderful opportunity to network and continue my training. Along with Callebaut, I studied in Belgium and Istanbul, and I also travelled and made many new contacts in the profession. Restaurants often ask me to come as a guest educator, which gives me the opportunity to continue meeting new people and networking. I especially want to mention two mentors who helped me: Professional pastry chef Marijan Konuk, who is now retired but judged the masters exams in the Chamber of Trades and Crafts, and also Miroslav Lisica who graduated from Le Cordon Bleu in Canada.

Kul IN: In your opinion, what are the main differences between restaurant pastry making and classic pastry making?

Pastry shops have larger norms, trays, and a completely different principle of work and business. For example, in restaurant desserts, I have 7, 10, or 13 elements per plate, but the norms are smaller and I do pastry prep every two to three days. Also, in restaurant work, it is very important to stay in close communication with the rest of the staff. Before I start preparing my desserts, I always consult with the waiter and sommelier to see what each guest had previously eaten and which wine he drank. All of this is extremely important to ensure that the dessert pairs well with the rest of the meal.

Kul IN: In which spices, flavors, and techniques do you find particular inspiration? Which desserts do you personally like best?

Personally, I most enjoy classical desserts and Croatian traditional desserts such as gibanice and strudels. Lately in my new desserts and pastry ideas I often use fruit purees, and I like combinations such as goose liver, micro vegetables, or sprouts. I like adding odd ingredients to spur my guests to think.

Kul IN: The best compliments?

When I send a dessert out, I sometimes like to leave the kitchen to see the reaction. When I see that my guests are smiling and taking their phones out to take a picture of my creation, I know that I've done a good job, and that motivates me to keep going. The greatest compliment I've received is that I make the best desserts in the city.

To open something of my own...(laughs). We'll see, but I definitely what to continue working and learning.

Kul IN: As a guest lecturer at Kul IN, I have to mention your great mentoring skills...

Since the beginning of my working career, I have been responsible for the interns. I'm always glad to be working with young people. I always tell then that if they listen, they can learn everything.

Kul IN: What advice would you give to young pastry chefs who have just finished training and are starting to work?

Learn to do as many things as you can, and keep fighting. It is hard, but you have a chance. There is a high demand for pastry chefs, not only in Croatia but also in the whole world. However, it is important to give it your best the first few years, to be relentless, and to keep learning.

Kul IN: If you were at the beginning of your education today, would you choose to train at Kul IN?

I would definitely train at Kul IN. Young people lack knowledge, I see this in the interns I train. They need the experience, and Kul IN can give them that.

Kul IN: Where do you see the future of pastry?

We have a lot of good cooks and pastry chefs, and that trend is growing, the progress is visible. I think we have a bright future.