I was born with a love for meat - Tihomir Smoljanec 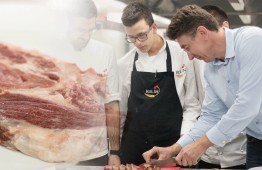 Tihomir Smoljanec, owner of Meat the King, specialized butchery, master of meat aging and true lover of the quality of the breed of Black Slavonian pig, once again through his guest lecture successfully showed our students the importance of quality and origin of foods. While the baby beef ribeye was being prepared on a pan, and while the students were tasting dry aged beef T-bone, Tihomir shared his thoughts on livestock breeding and meat in general.

Kul IN: How did it all begin?

I was born with a love for meat. I am the third generation of traditional cattle breeders, I grew up on on a farm, and I have been working my whole life with livestock, cattle, young calf and calf. For me, the whole business idea came naturally, through the family. Our family company deals with the production of meat and meat products from Croatian cattle and black Slavonian pig. The brand Meat the King was launched about two years ago and we currently count five people in the team.

Kul IN: What does Meat the King have on offer?

Meat the King currently offers meat and products made of black Slavonian pig, dry-aged meat from domestic veal and domestic baby beef. Baby beef is special because it is bred in a specific way that implies nutrition based on a high percentage of corn and corn silage and is being butchered in the age of about 14 months. All this results in very soft meat which, when cut as a rump steak and beefsteak, does not require any aging or treatment prior to cooking.

Kul IN: With which breeders do you co-operate and does Croatia have quality farms and meat?

Meat the King cooperates exclusively with Croatian breeders. In principle, these are mostly acquaintances and friends for who I know how they breed and how they feed their cattle. For this reason, I can safely say that if we look at the black Slavonian pig, Croatia has definitely one of the five best breeds in the world. Croatian breeders also offer the best young calf throughout Europe, taking into account Vojvodina and a part of Bosnian Posavina. One of the reasons for this is the fact that we possess a granary and therefore the ability to reach high-quality grains at a very reasonable price. In addition, in our country is still kept the old-fashioned way of breeding cattle, which implies a high share of corn and grain.

Kul IN: With which Croatian restaurants do you work?

The network of restaurants I work with is not too big, but those are all among the best restaurants in Croatia. As examples, I can mention Bevanda, Carpaccio, Dubrovnik 360, Mano, Draga di Lovrana ... there are quite a few.

Kul IN: What was the best piece of meat you tried?

Here I would list three pieces of meat. The first was a roast steak of the black Slavonian pig when I tried it for the first time. The next one was txogitx, a Basque cattle that is only butchered at the age of 15 to 20, so that the meat actually matures on the cattle and is only ready to be consumed at the stage when it starts to atrophy. It is definitely the most specific taste of beef that I have ever tried and it really impressed me. The third best piece of meat was an aged black Slavonian pig, made according to the principle of dry aging in the system of dry maturing. That was beyond any comparison.

Kul IN: What kind of equipment do you use in meat processing?

As far as the equipment is concerned, I really use the most primitive processes and I try to make minimal interventions on the meat. Especially when it comes to the production of salamis, sausages and other products made of Black Slavonian pig. We use salt, pepper and eventually smoke in the traditional way. For cured goods, there is a need for maturing rooms as, without them, it would not be possible to make a sausage in a certain period of time. There is nothing special or revolutionary about this whole process, I try to make everything as simple as possible.

Kul IN: Which of the native Croatian breeds of pig or beef have a culinary future and where do you see room for progress and development?

Definitely the black Slavonian pig, then the domestic Simmental and the Buša cattle. The Black Slavonian pig by itself is a genetic wonder and should be kept in the way it is, bred in the already established way, extensively on the pansy and the results will be phenomenal. I think that it has the best future in livestock development for several reasons. First of all, it has native genetics, it is top quality and is not too demanding for breeding. All of this can be an excellent story, it just needs some commitment, time investment, resources and we need to expand the production because we're still under 2000 sows all over Croatia. For example, Istrians have made a very good brand of Boškarin, but from my point of view,  Boškarin beef and cattle are gastronomically unusable due to their poor diet. With a little investment in nutrition and the way they are kept, we could get much more out of them.

Kul IN: Can Croatia be expected to breed first-class beef one day like Japan and what does it take to make it happen?

Croatia is already breeding first-class beef, but everything is in nuances. As for Japanese Kobe beef, the thing is that they have very good branding, because essentially, the species of beef, that is, breed does not condition the quality, appearance, and marbling of the meat, but only the way it is kept and fed. If you would apply that same system in how they are kept and fed here, you would get top quality beef in Croatia as well. We are currently in the test development phase for the Croatian Simmental cattle whose meat will be in rank with the best Kobe beef.