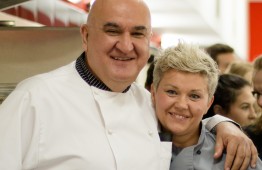 Besides her extensive experience in pastry making, Sanja Sajko worked alongside the well-known Croatian pastry chef Petra Jelenić in the pastry shop Mak na konac. She was also the head of the pastry department at Rougemarin restaurant and worked in Zagreb’s popular restaurant Time, Amadria Hotel Capital  in Zagreb and today she creates pastries for hotel Le Premier. One of her most recent workplace was in one of the first Michelin-starred restaurants in Croatia, 360 Dubrovnik, where she worked as pastry department sous chef. Sanja’s professional story is truly inspirational due to the fact she started working as a pastry chef later in life when she decided to quit her steady job and embrace her true love, pastries pastry-making. Ever since a TV show made her the star that she is, her professional pastry career has been progressing rapidly. Besides pastry making, Sanja also enjoys being a mentor. She shares her professional knowledge and experience with  Kul IN students where she works as a guest lecturer.

What is a typical day of a pastry chef like at a renowned restaurant?

Frankly, every day brings a new challenge! You have to organize your time and know how to plan in advance because everything needs to be completed before the service. Once the service starts, there is no more time to prepare even one dessert item because you have to be focused on each dish equally. On my previous job, the Michelin-star 360 Restaurant in Dubrovnik, we had like 30 dessert components and each dessert had to turn out perfectly. At the very beginning, everything is stressful, but later on, when you get used to everything, it gets much easier. Yes, it's challenging but I would recommend working at such a restaurant to anyone who plans to make confectionery their career. 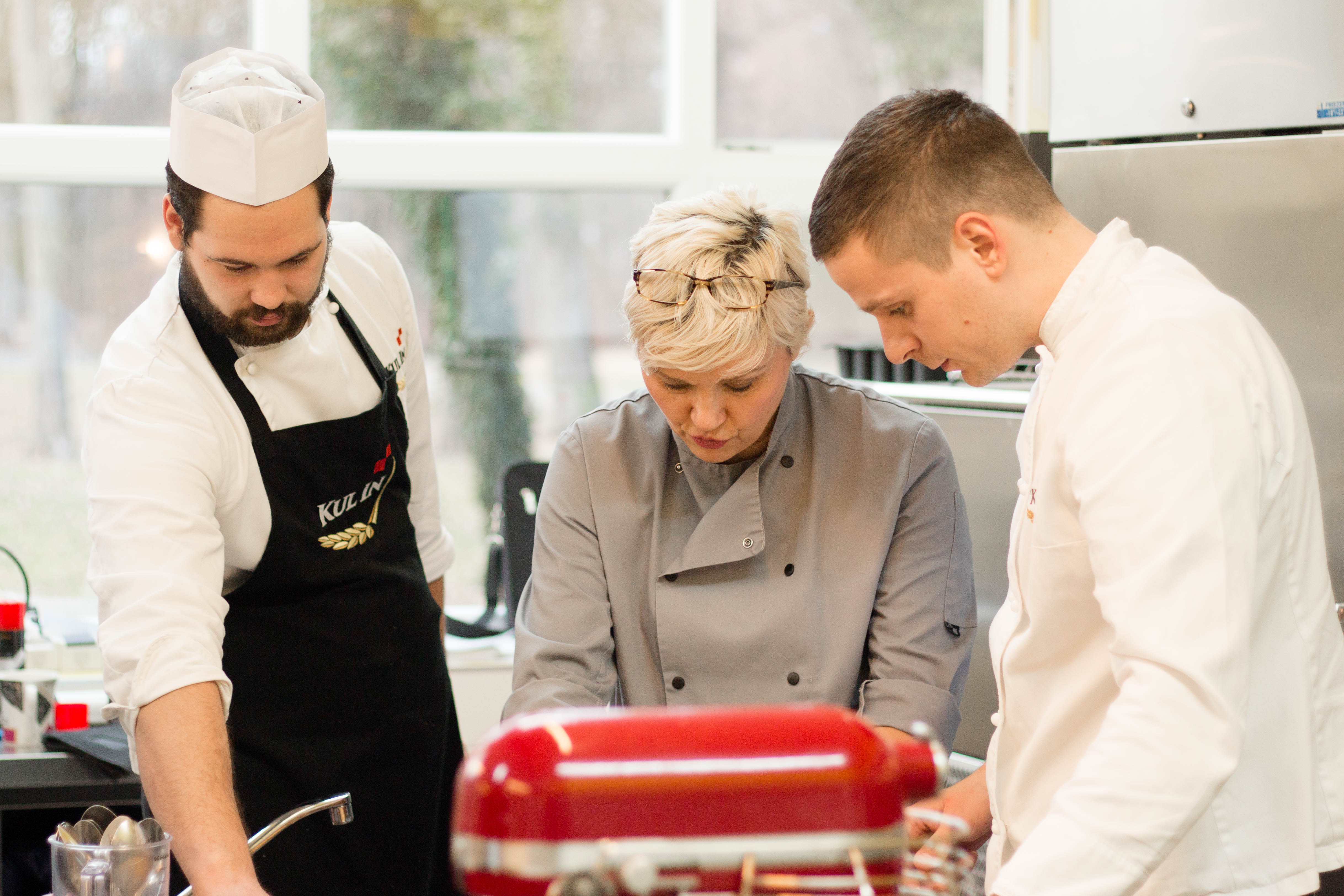 What changes take place when a restaurant gets the Michelin star?

You have to be absolutely focused at all times, and everything has to be top-notch. You never know when Michelin's audit will show up, the smallest mistake can make them take the star away. At the Restaurant 360 audit was conducted three times last year, we kept the star and it is a confirmation that we did a really good job.

The main difference is in the fact that Michelin-star restaurants use top quality ingredients. Everything from chocolate to fresh fruit that is delivered every day meets the highest standards. Dessert must have at least six segments. You cannot just slice a piece of cake and put it on a plate at a Michelin-star restaurant, it just does not work that way. 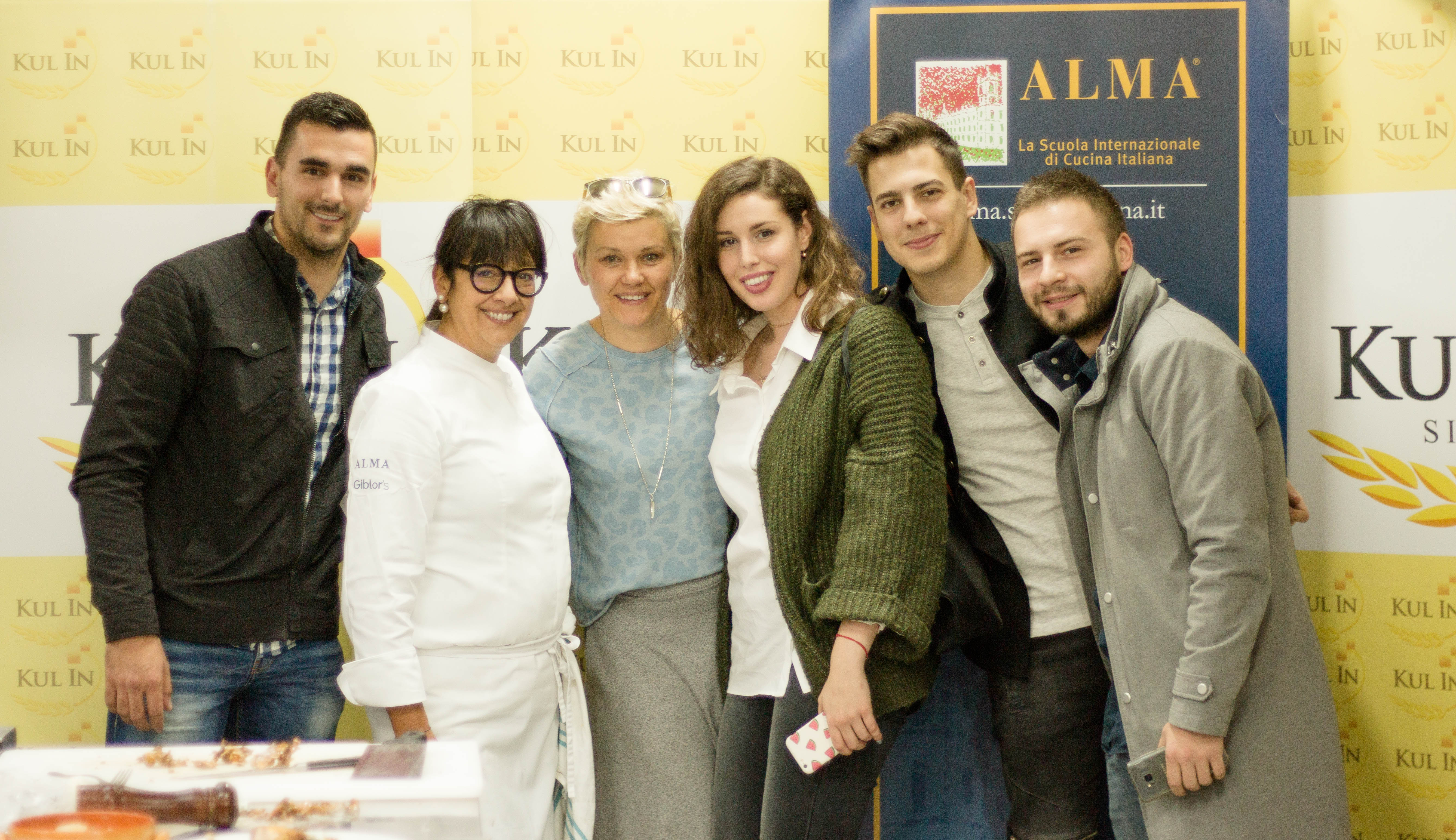 Many chefs had to return their Michelin stars because of all the pressure they bring. Can you understand their side of the story?

Yes, absolutely. Maintaining a Michelin star can be very challenging and exhausting. You have to be focused 24/7, Michelin star leaves you no room for mistakes. I would like to point out that the chef Mario Curić, is leading his team brilliantly. At the Restaurant 360, there were 24 of us in the kitchen, four in the confectionery team, and everyone had a specific role. At the restaurant, each unit deals with a different segment and there are no switching places, you have to be focused on your tasks if you want to be successful. Apart from the chef Đani Van Bloumen, and me as sous chef, two more girls constituted our confectionery team. We were very efficient because we organized ourselves, communicated and acted as a team.

What traits should every beginner have in order to make it in the gastronomy industry?

They have to be a bit psycho[1] (laughs). They should never stop reading, studying the industry, and learning. This is a job that requires constant learning and awareness of new trends. You just have to be 100% devoted to the confectionery. 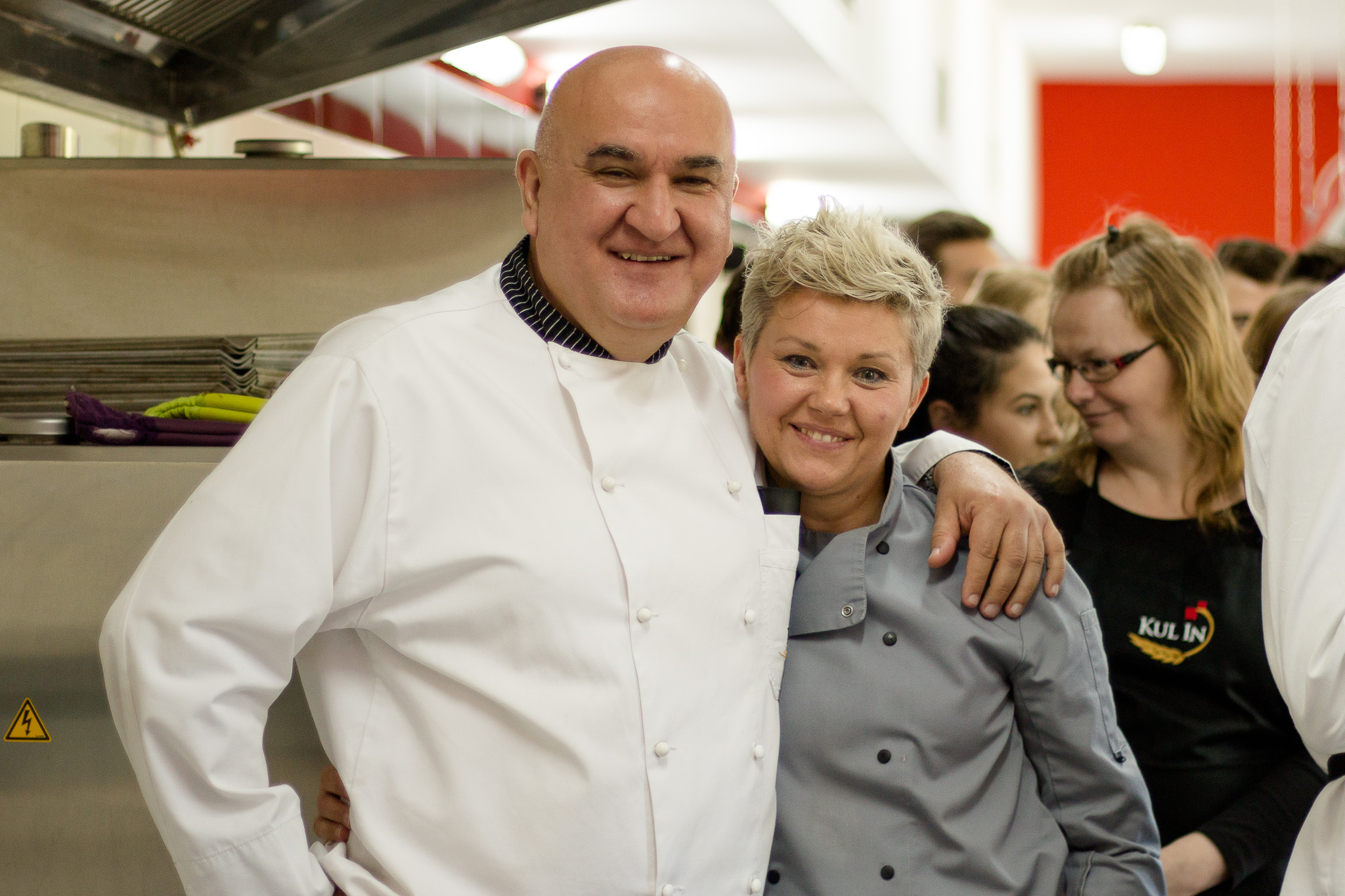 Which recipe launched your successful career in gastronomy?

In gastronomy industry, we all know each other and recommendations are the key to success. To be clear, this does not make it easy. But I love confectionery and, despite my age, having a monotonous job would destroy my work ethic. As tiring as it is, I still love the dynamic that permeates the confectionary industry.

Tell us something about your beginnings, what career path were you on before discovering your passion for confectionery?

My family owned a bakery. My husband was in charge of the business, while I did the paperwork, since I am a trained economist. However, things really took off when my niece signed me up for the ‘Three, Two, One – Bake!’ show, where I evetually won the first place. Soon after that Petra Jelinić invited me to work for the Mak na konca pastry shop. After that I started working at Rougemarin where I was the head of the confectionary team, then the Time restaurant the Restaurant 360 in Dubrovnik, Amadria Park Hotel Capital in Zagreb. Today, I am the head of the confectionary team at a boutique hotel Le Premier Hotel.

Because it is not abstract, it is exact. There is no improvisation in confectionery, you always have a recipe, you have to scale and measure everything and there is a clear system in place. That is my kind of job. 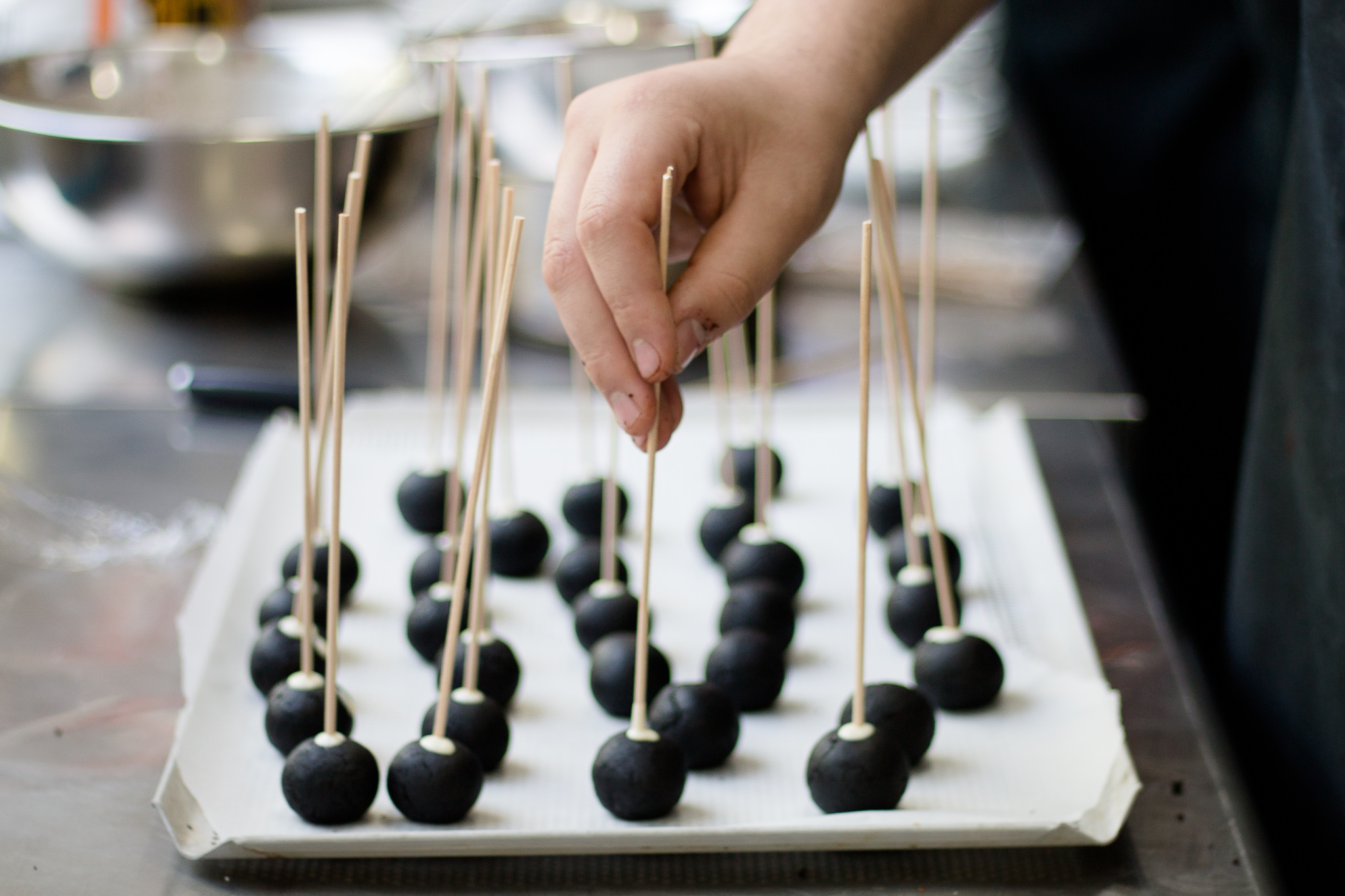 What inspires you in confectionery?

There is always a story behind the inspiration, a story of a menu, a flavor or something else. A good chef has to be creative and ready for teamwork because nothing can be done without overall agreement. Different flavors have to complement each other.

A good dessert has to be done by the rules?

Absolutely! For example, desserts should have a dose of tartness to refresh our taste buds after we have had the main course and wine. A good recipe ensures that we get the real, intended experience from the dessert. Desserts should not be too sweet because the sweetness can mask all the other flavors that are supposed to be experienced. A well-executed dessert will impress the guest regardless of how many courses they have had before the dessert.

Tell us what confectionery means to you.
At this point, it means everything to me.

[1] Word-play, since in Croatian Sanja's surname „Sajko“ is pronounced as „psycho“