Culinary School With a Craft-Brewing Center 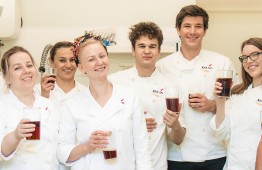 Everyone is welcome, I simply love talking about beer!

Although once on the margins of gastronomy, the booming industry of technologically sophisticated craft products has launched beer into the culinary stars. Today, beer is an important part of restaurant and hotel menus and represents a new stream of creativity in gastronomy. Beer and food pairing and the details we evaluate when choosing the best beer are just some of the contemporary issues that culinary professionals brood over. With this in mind, we have opened a beer practicum and craft brewing center. Kul IN Beer lab provides the broader education necessary to get a full grasp of the food and hospitality industry. Students will have the opportunity to participate in brewing and learn how to identify a top-quality product. They will know what to look out for when tasting, and learn different ways and forms of serving beer, and pairing beer with food. We bring you the interview with Kul IN's master of all things beer, Sanel Subašić. He will introduce you to the charming world of brewing, familiarize you with the latest trends, as well as details and opportunities that beer as a food item offers chefs and other culinary experts. Kul IN: Why beer? What is the story behind your beer business?

- Beer has been a love and a passion of mine since I was a child! Previously, I was a beer consumer and collector of beer caps, loved various types and styles of beer. Then I found out that beer can be made at home ... I broke my leg in training in 2013 and that's how my homebrewing story began.

Kul IN: Have you undergone any formal training, how did you acquire the knowledge you have?

- At the time, it was hard to get information on how to make beer at home, so I focused on contemporary international sources – I perused forums and watched YouTube videos as a practice and for making equipment. 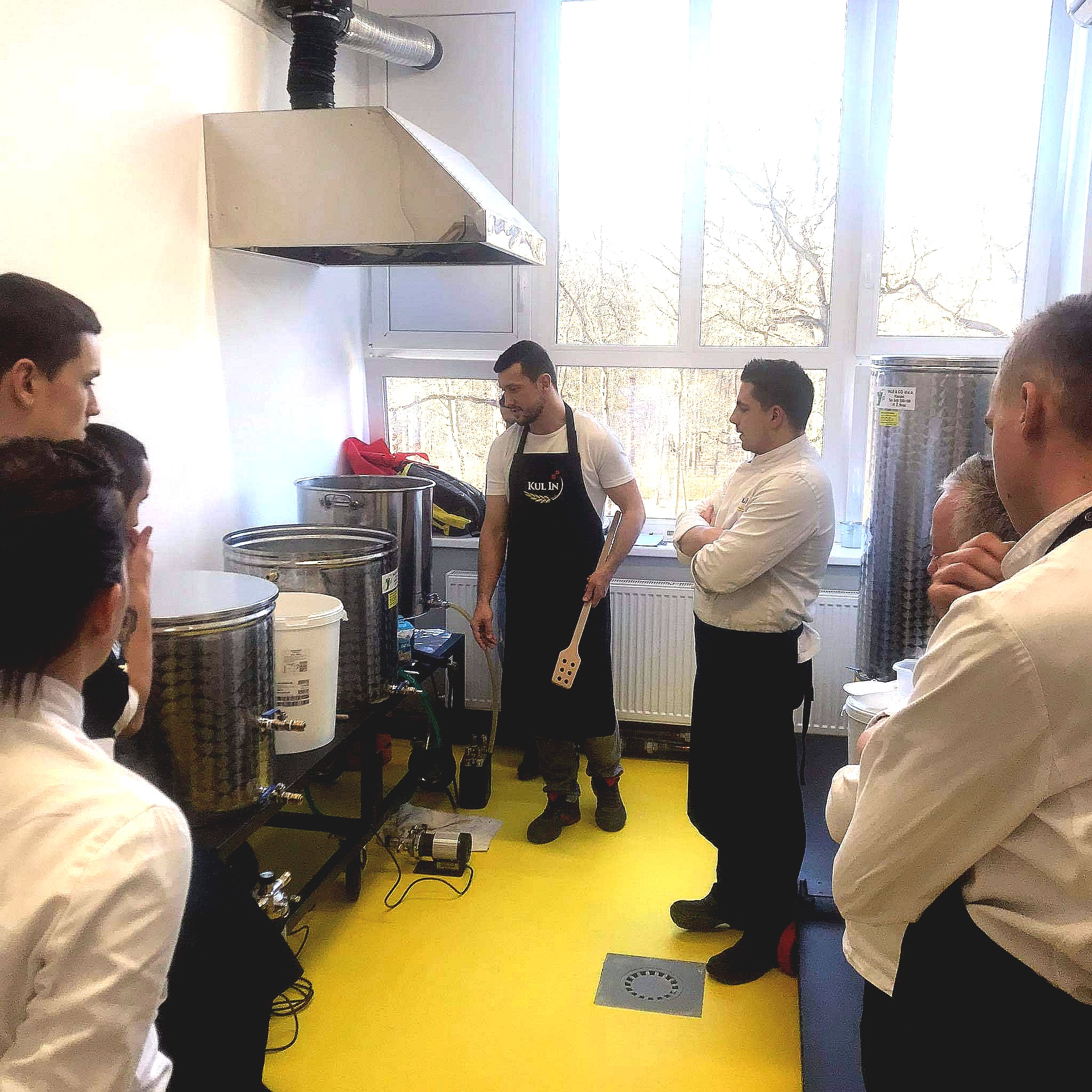 Kul IN: Tell us more about your business?

- Everything comes out of my love for beer. The desire to learn and thrive increases with each beer making. And that is what makes this job special - you can make countless different beer recipes. And the process can be refined to the smallest detail and nuance, you can create something for everybody by tweaking the process a little.

Kul IN: What kind of equipment do you use?

- I use the H.E.R.M.S. system, aka the heat exchange recirculating system. And the method is All grain, as the term suggests – I use all-grain and natural ingredients. No flavor enhancers. 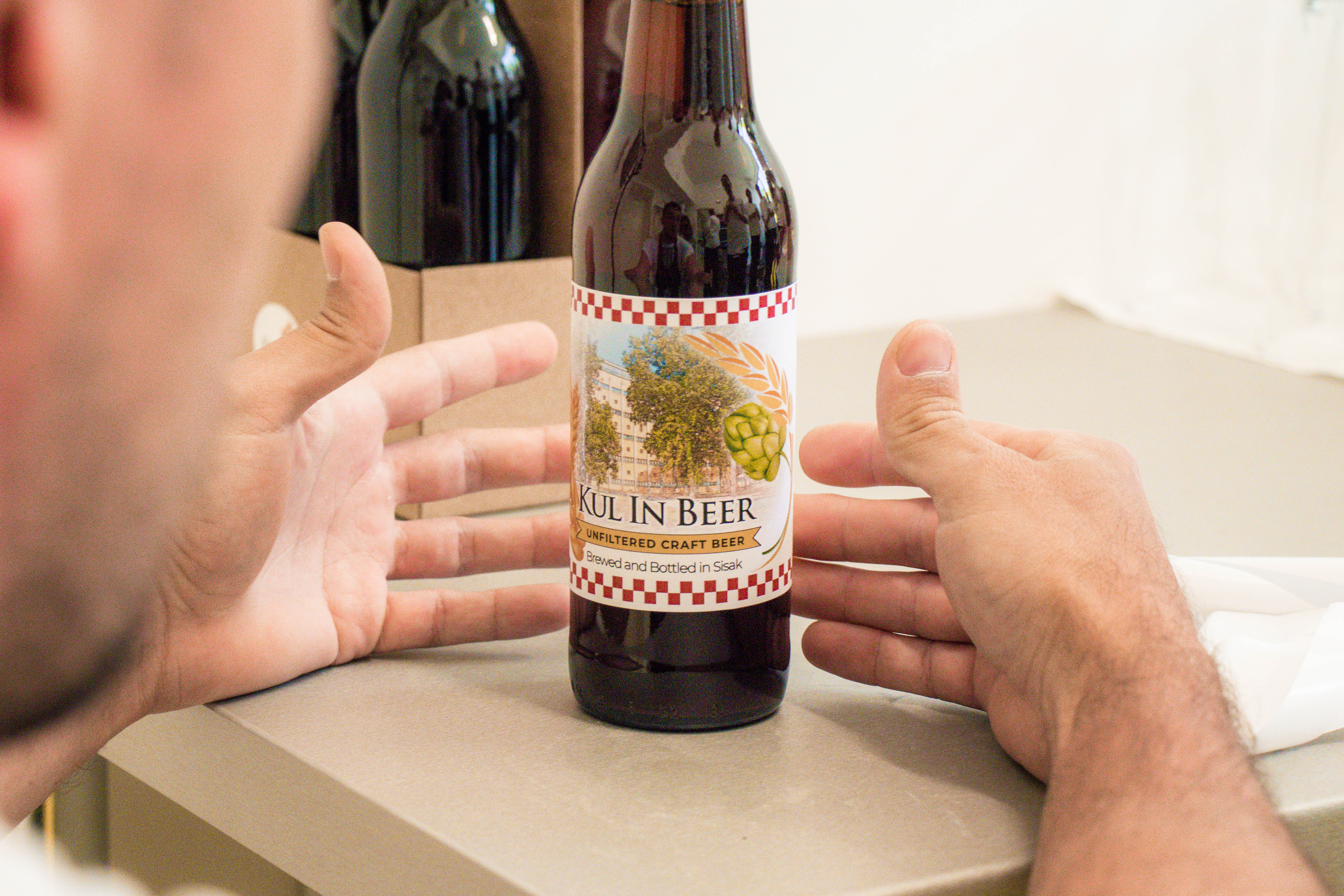 THE BUSINESS SIDE OF BREWING

Kul IN: What is the most important thing to keep in mind if you are in the brewing business?

- The most important thing is to educate yourself on the equipment, to keep up with the time and technology, and to be careful about cleanliness and sterilization!

Kul IN: How important is marketing to beer businesses?

- Marketing, as in any other business, is very important if you want to succeed in the market, and only with good marketing can the quality of the product truly shine. Once people familiarize themselves with the quality, the product does the marketing on its own. That proved true in my case.

Kul IN: What was the most challenging thing about starting a beer business in Croatia?

- I haven't started a beer business in Croatia yet. I spent almost two years researching how to open a small brewery on the side. Laws in Croatia do not gel with such projects. There is one law for breweries of every type and size – the big cats and the small, craft breweries. In other words, the law would treat me as if I were a large corporation like the Ožujsko or Karlovačko breweries ...

Kul IN: What makes your beer special?

- I offer people something unique that they can't find anywhere else, and I get positive feedback for that.

Kul IN: What will you focus on as a brewer and as a mentor at Kul IN?

- I want to get Kul IN students acquainted with the beer-making process and various aspects of it. And in the future, I hope to promote Kul IN craft beer and further educate those interested in the craft beer world.

Kul IN: Is there anything similar to what you are doing in Croatia?

- As far as I know - in this form, no. We have a faculty of brewing in Karlovac, though. There were several workshops for beer enthusiasts in Zagreb where they could come and brew a small amount of beer from the extract. 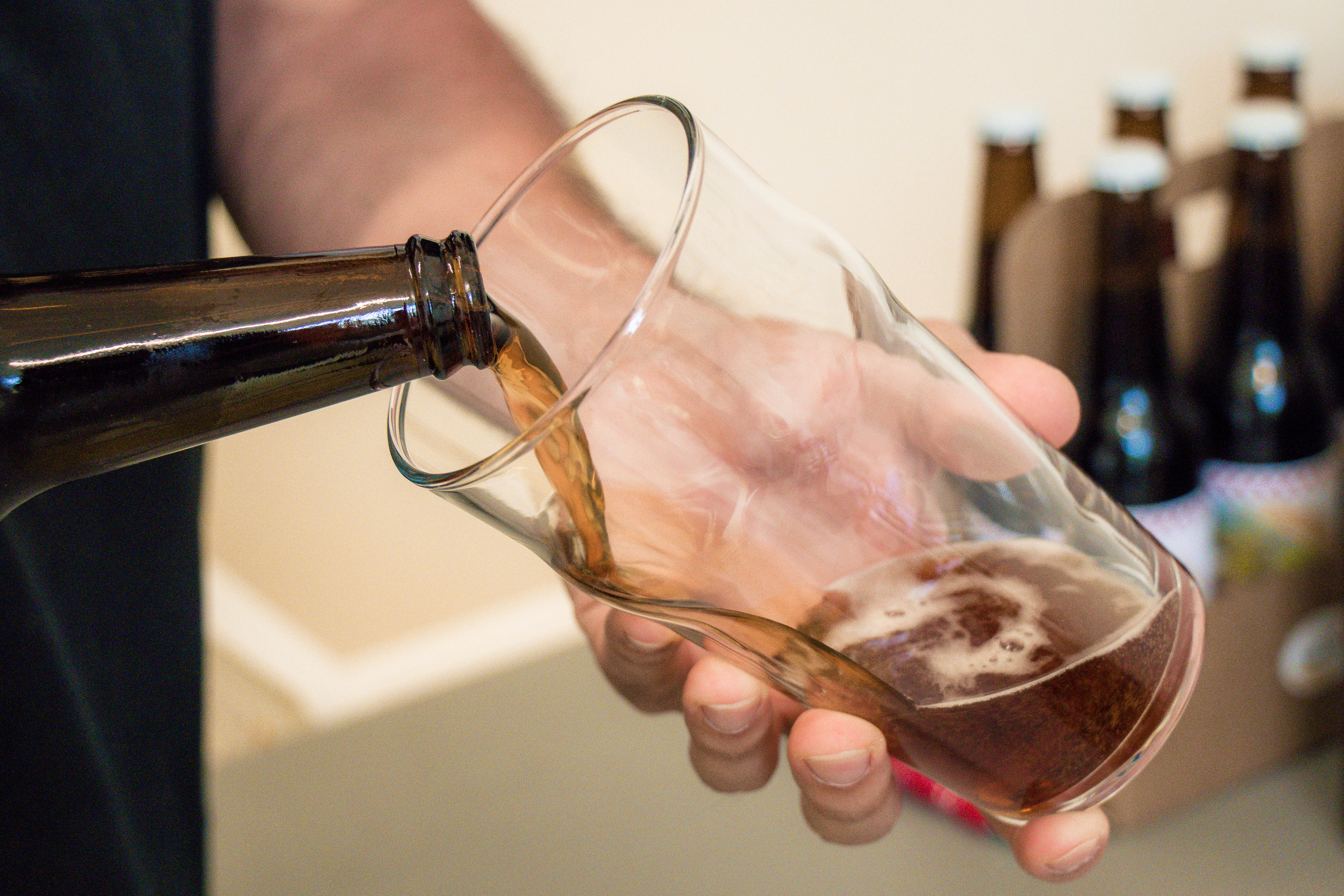 UP CLOSE AND PERSONAL ABOUT BEER

Kul IN: Do you have a favorite beer? Which of your recipes is your favorite?

- It's hard to single out one but I prefer dark wheat beer and American pale ale. I have a few favorite recipes, among which I would single out American pale ale with coconut. This beer was special because of the specific aroma of caramel malt and hops, which gave the beer a citrusy aroma, but with very little bitterness, and in the aftertaste, you could taste the coconut, as if you had eaten a coconut pastry!

Kul IN: Have you traveled to any of the countries famous for their beer? Which beer culture you like the most?

Kul IN: What needs to change in the Croatian beer-drinking culture, what could be better?

- In Croatia, everyone is used to lagers and what the big breweries have to offer. But lately, the scene has been changing and people are beginning to realize craft beers are characterized by better quality, and full of aroma and flavor. It is also encouraging that various festivals and beer manifestations have started to promote craft beer. 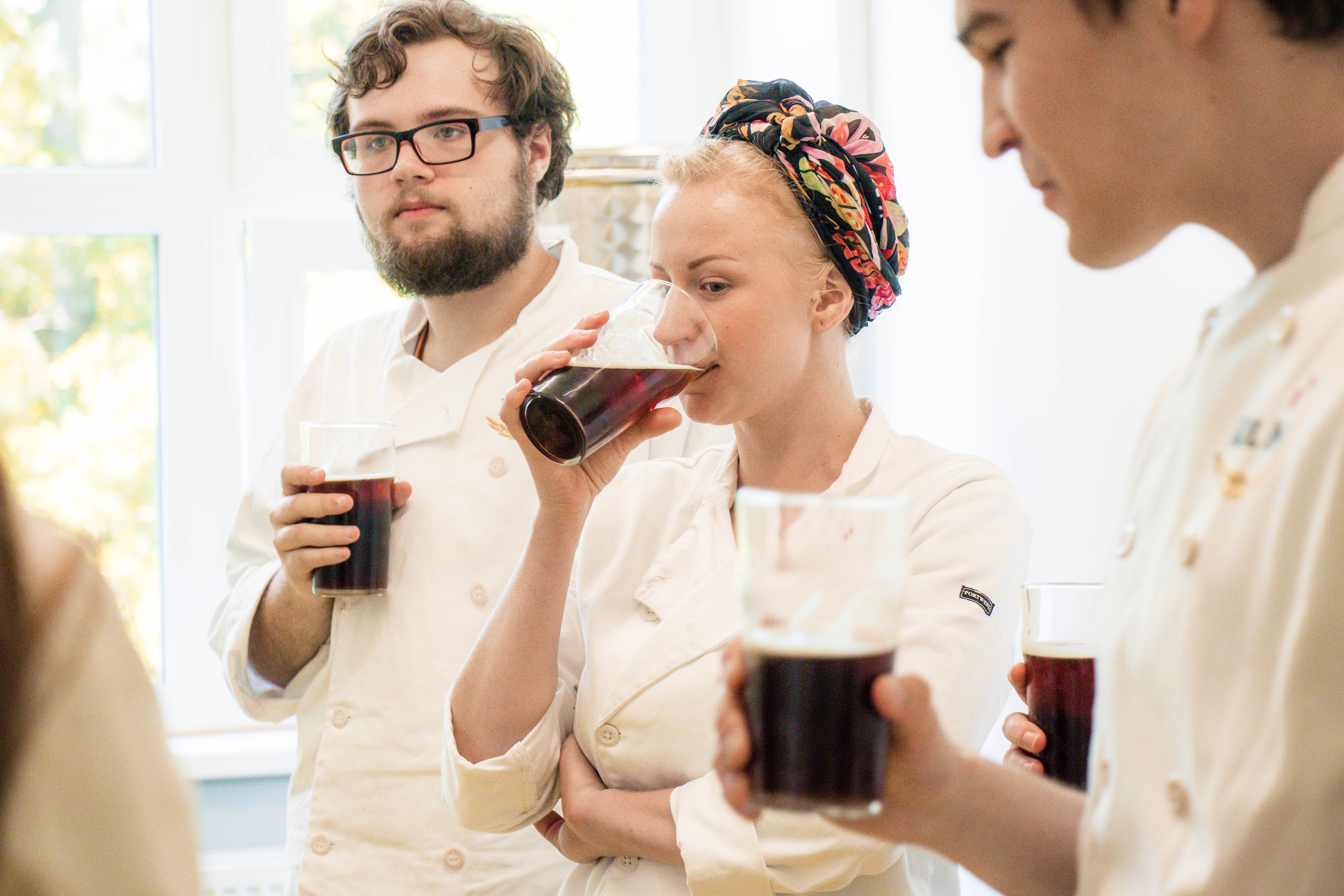 Kul IN: Which beer best represents your Beer Lab?

- Right now, a Kölsch beer represents me the best. It is a beer that is a hybrid of lager and ale and has 20% wheat malt, which gives a special note of acidity to the beer, so it is reminiscent of wheat beer. It is low in bitterness and it simply glides when you drink it.

Kul IN: Where do you get your ingredients from?

- There were no ingredients in Croatia before, so brewers would source them from England and America. Today we have a couple of Beer shops in Croatia, so it's easier.

Kul IN: Are there any technologies or recipes you are experimenting with, and few brewers use here?

- I adjust the water depending on the style. I actually make a profile of the water minerals from the area where the beer is from.

Kul IN: Have you ever had an accident during brewing or did your beer turn out bad? What have you learned from the situation?

- In my experience, the only issue is the clogging of taps or if the hoses/valves become clogged. The lesson is to be careful when crushing and grinding malt and to keep in mind the order of adding malt during the process of crushing. 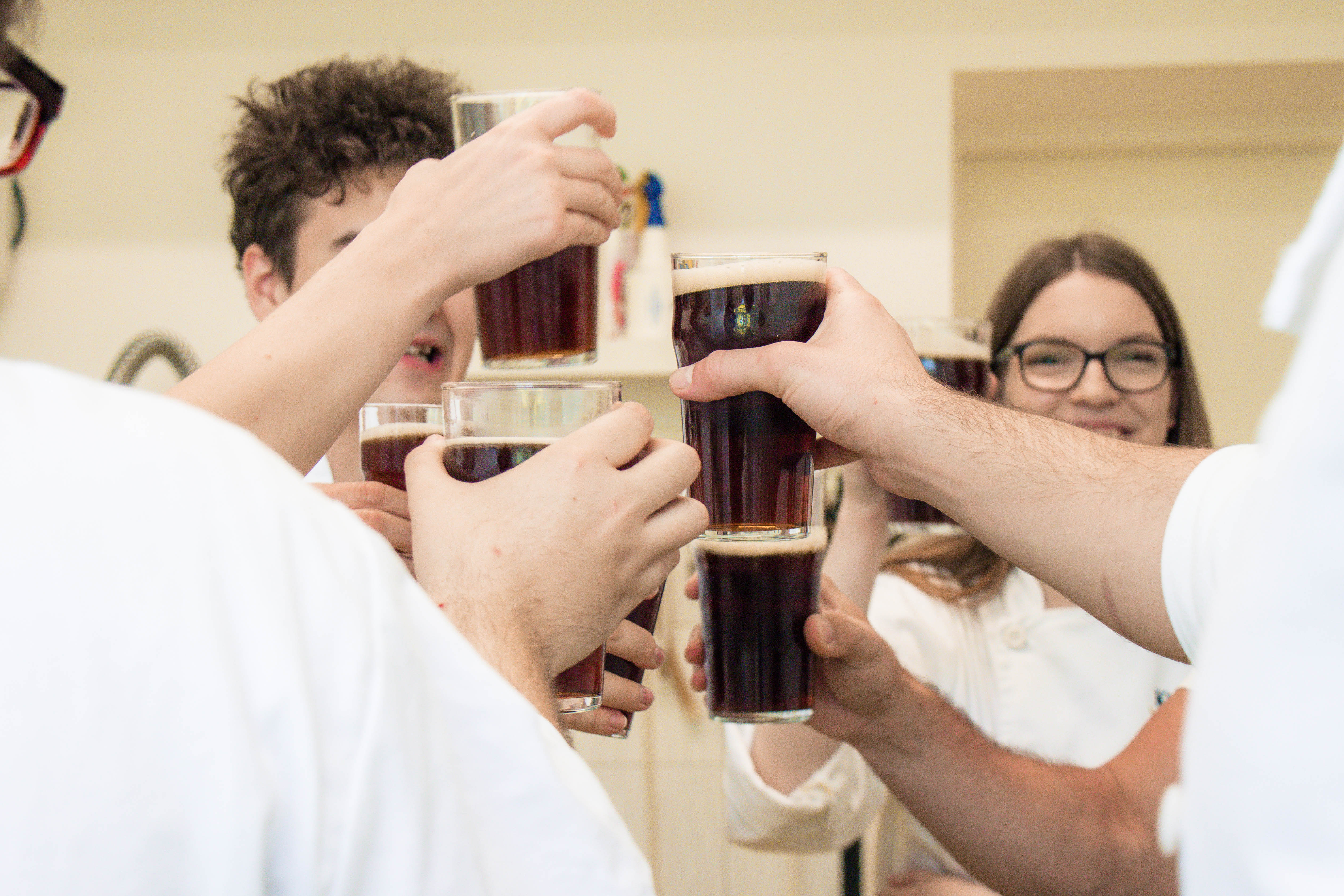 Kul IN: Do you have any secret advice or the key to perfect beer?

- The advice is to take notes and be vigilant about cleanliness or sterilization.

Kul IN: Who would you invite for your beer and why?

- Everyone is welcome, I simply love talking about beer!

Kul IN: What beer do you choose for a typical Sunday afternoon?

- When I take time to enjoy beer, I choose the wheat beer doppelbock (double bock), a beer that has aged for almost a year and is very rich in sweet aromas and yeast culture. It drinks like a cup of coffee.